I originally wanted to upgrade my Cooler Master Cosmos 1000 but it became appearent that the chassi was just to small for what I had planned for it so with some very helpfull assistance from the members of overclockers.com I went with a Mountain Mods. I also wanted to go with 2x EVGA 590 Hypercooper GFX cards but they are all but impossible to find.

Here are the specs for this build:

Not only does this chassi hold all the radiators and probably four more 120x3 rads, I bet I could fit a small giraff baby in there as well with the 7 rads. 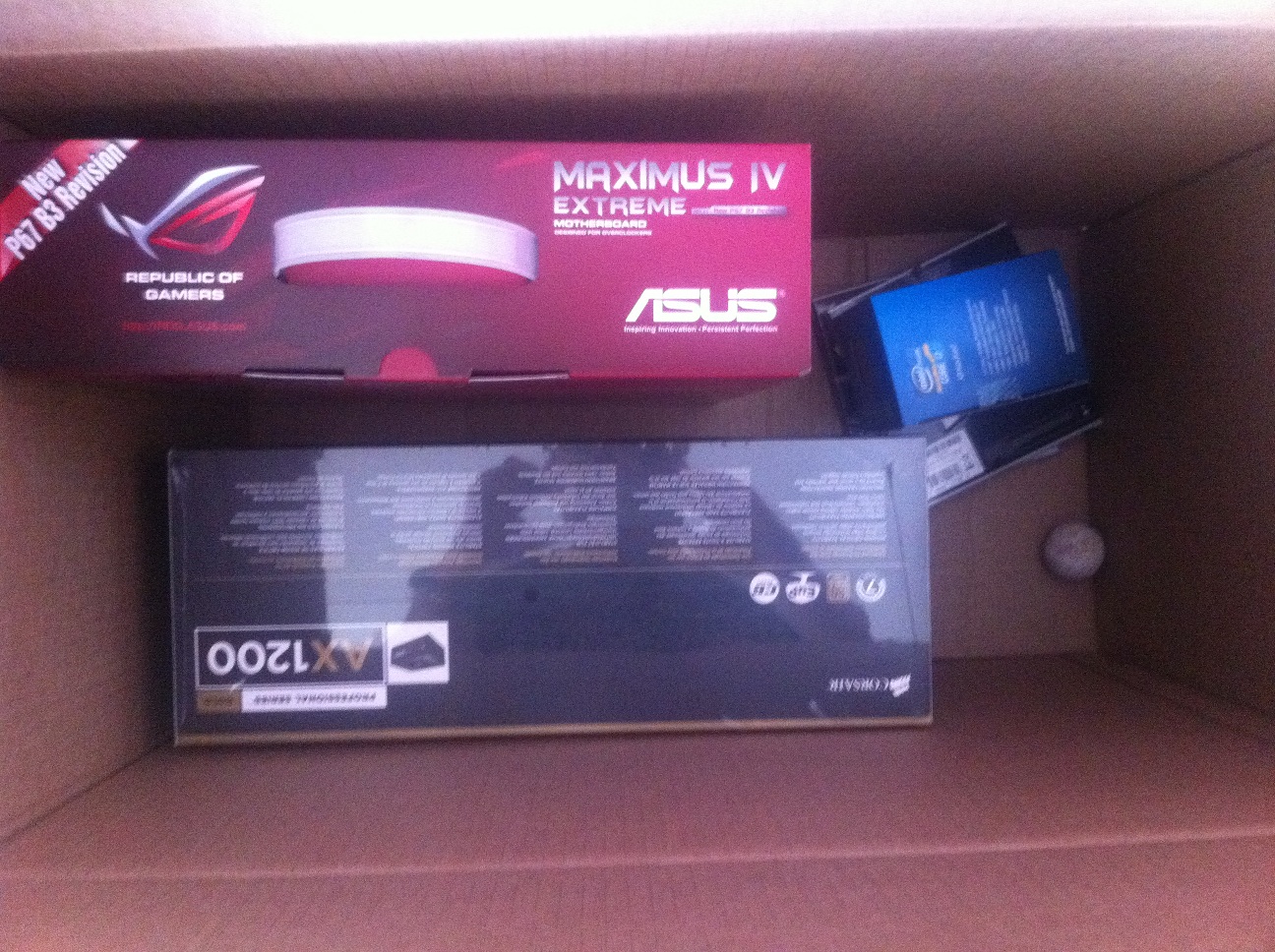 This is the one and only package I could actually buy in Sweden. Its composed of the 1200 W Corsair PSU, The Maximus IV Extreme Motherboard, the Intel Core™ i7 Quad Processor i7-2600K and the Corsair Vengeance Ram Memory.
All other items I had to costum order from aborad, evidently there is no need for water cooling in Sweden as we live in a cold climate and people appearently think we should just have the computer outdoors. Sort of like how Island have vulcanic power but in reverse. 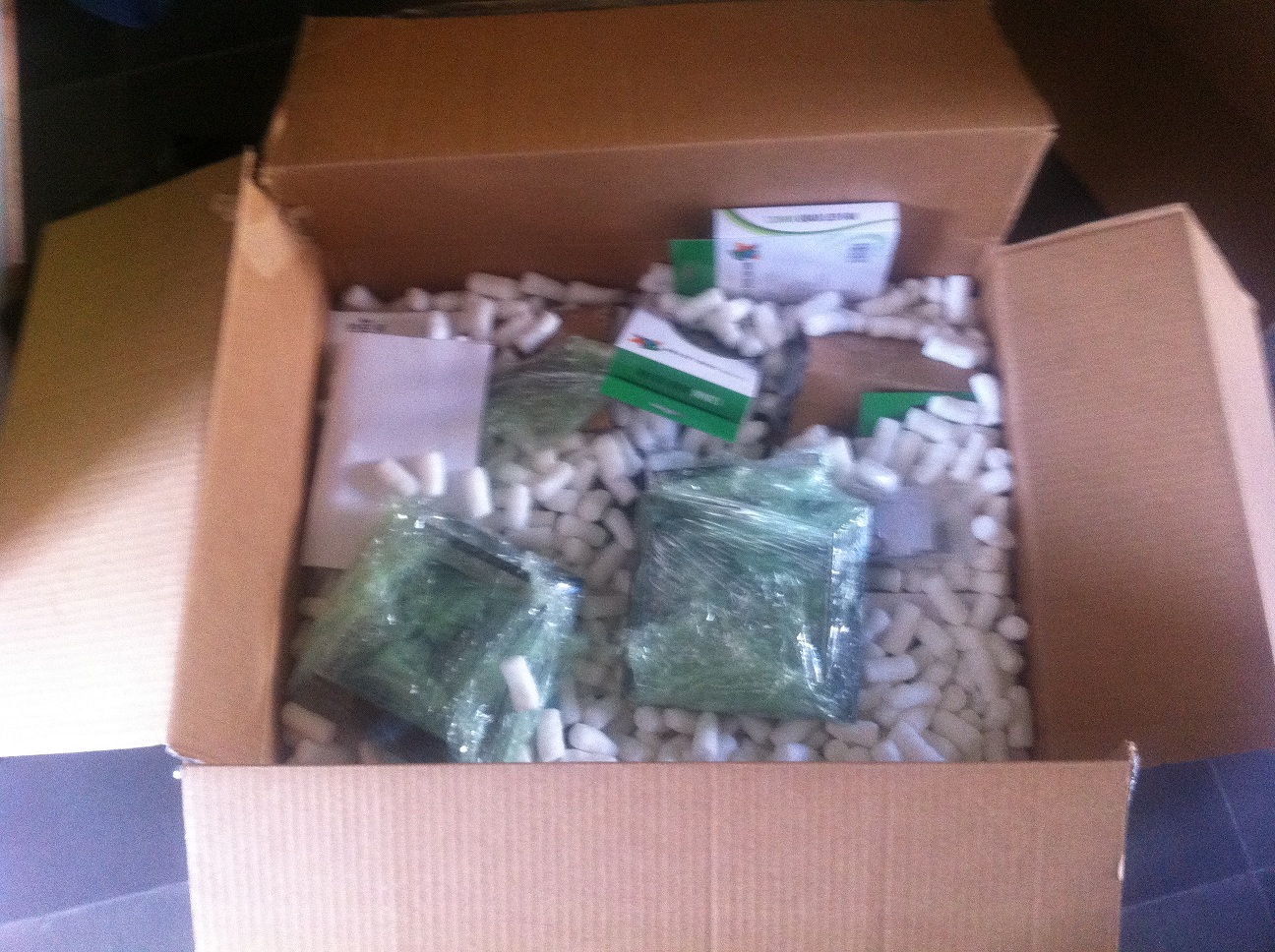 It got stuck in costums for a week. They were missing the VAT nr of my company and instead of notifying me right away so I could get my moneys worth in regards to the 1-3 day guarantee Fedex gave me, they waited for me to get annoyed and call.
In the box is the Acension CYO chassi, the 16 fans, the rads and the pumps. 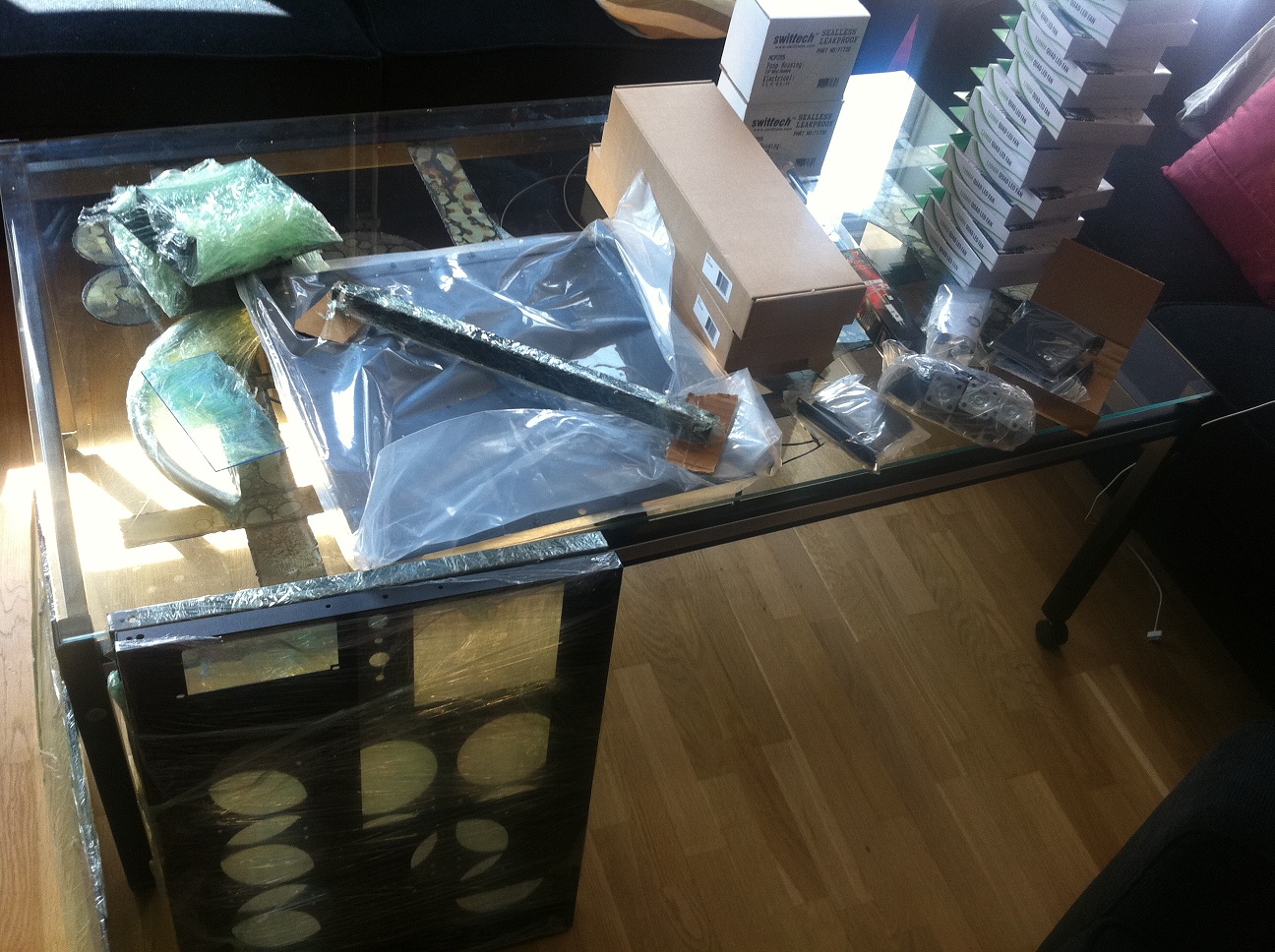 I neatly placed all if not most of the mountainmods package on my coffeetable just so you could get a preview of it before I assembled it. Assembling it was confusing, only beacause I was not sure which screws went where. The instructions were not clear. After some trial and error I got it working. 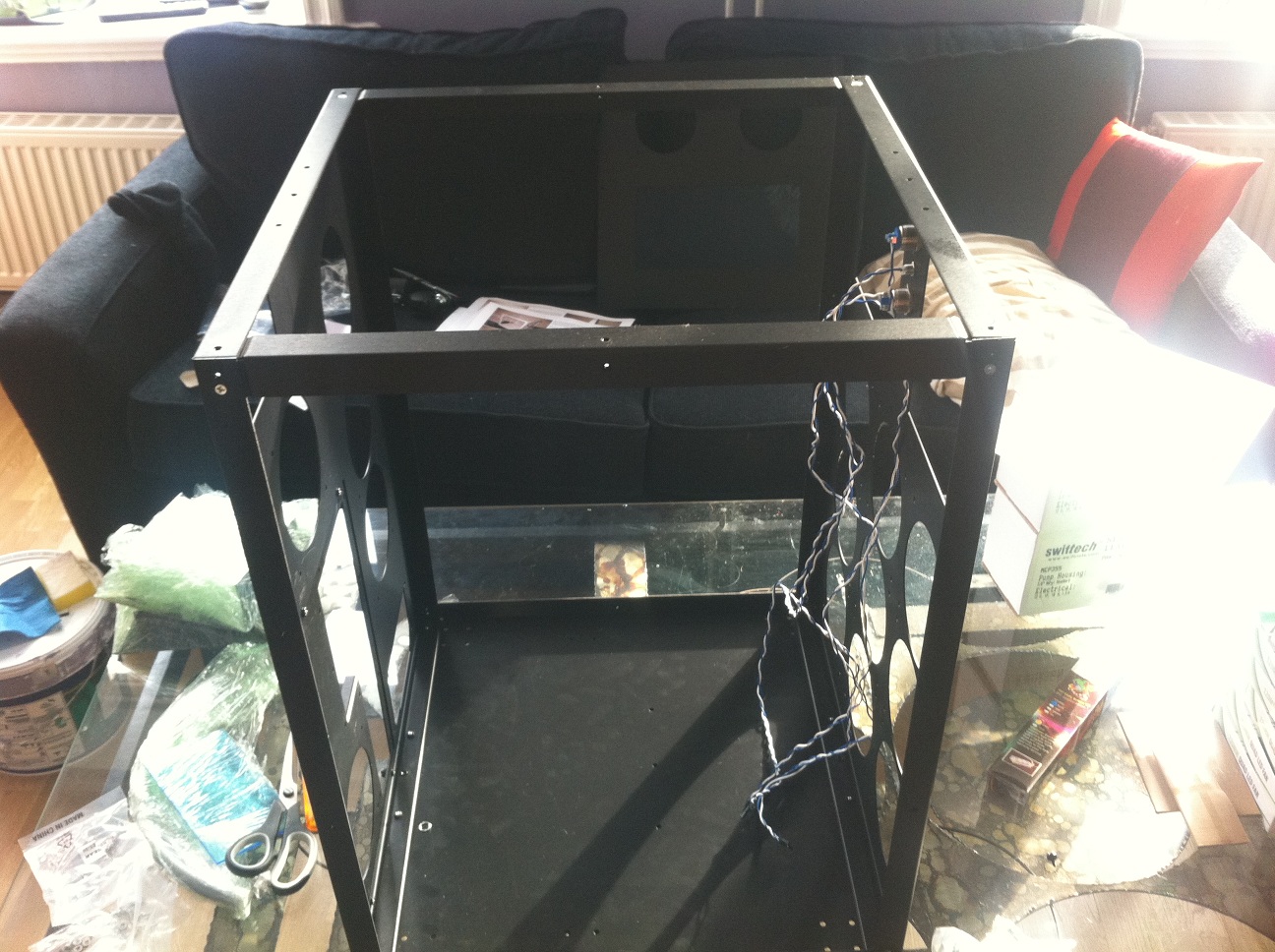 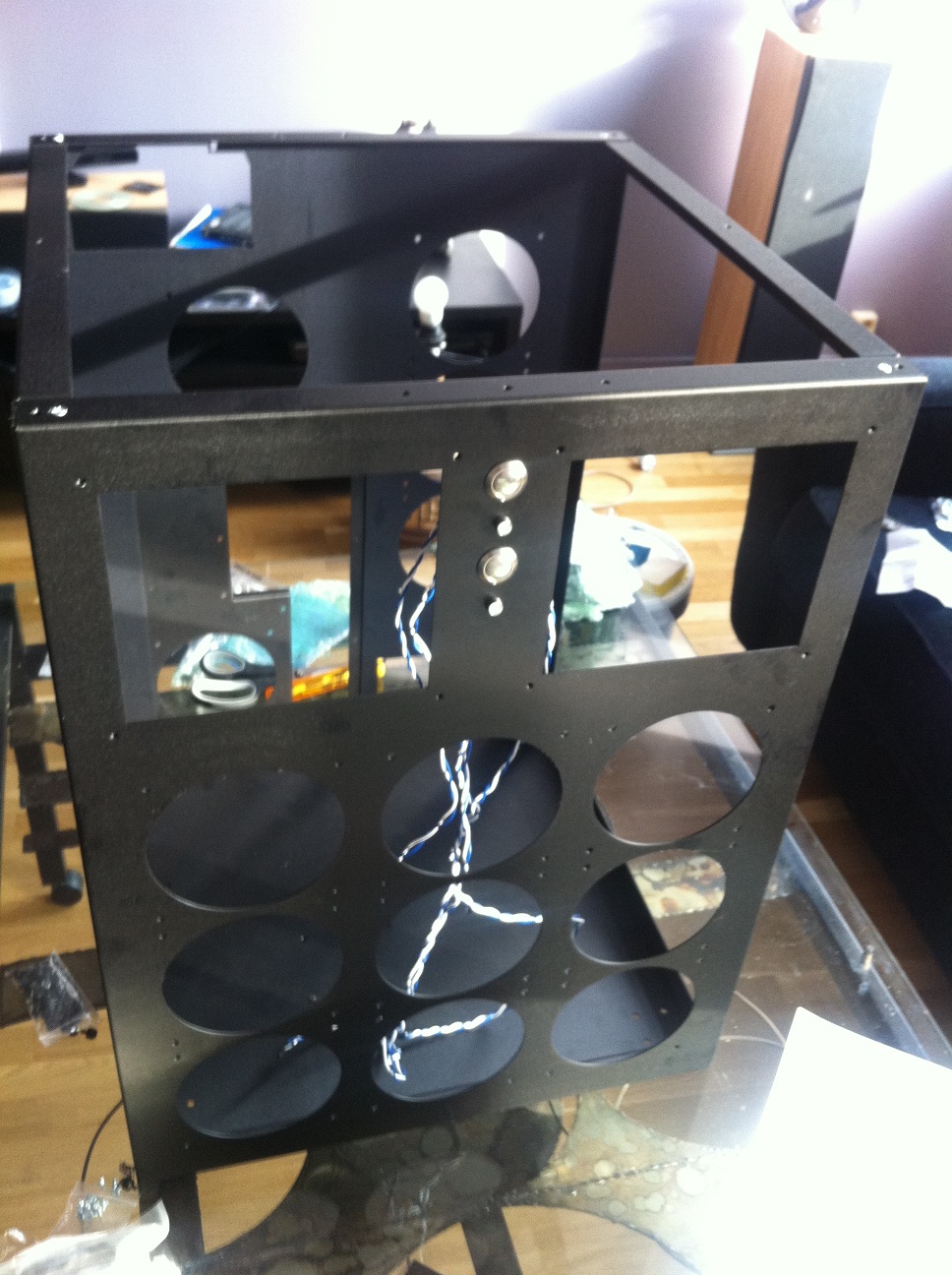 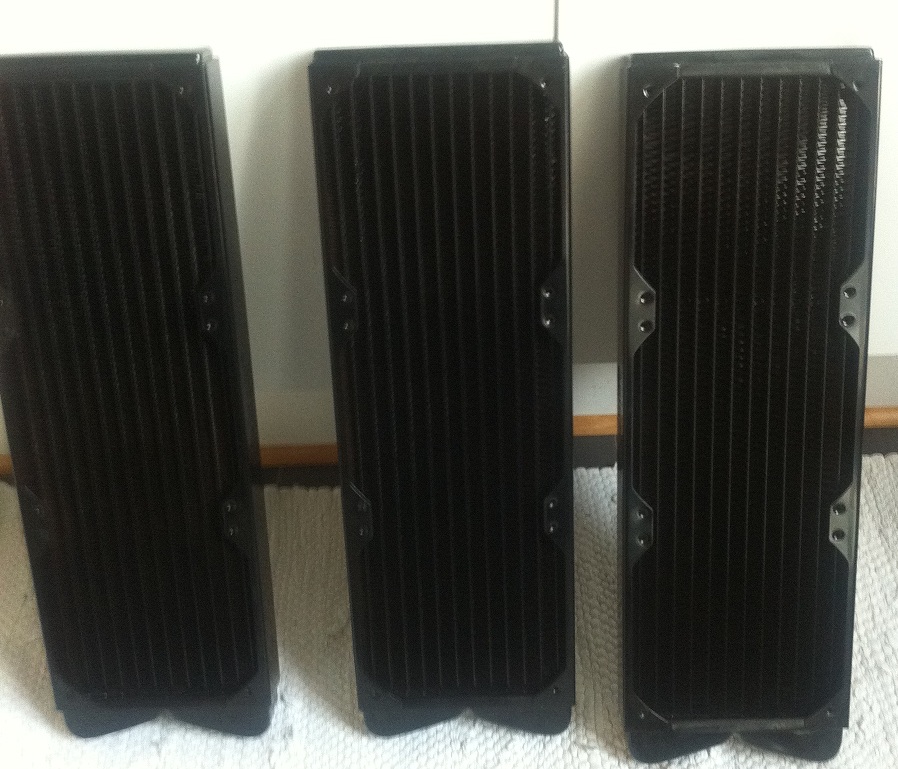 I boiled up some water, discovered I had no funnel and still proceeded with pouring the hot water in each of them spilling 70% of said water. The water came out cleaner than it came in but at least I got 15 min of arm shaking excersize.
Those fins on the rads bend really easily. Just with my thumb I accidentally bent like three of them in one go, couldnt believe it was that easy so bent another two. A screwdriver helped me to bend them back in place more or less. 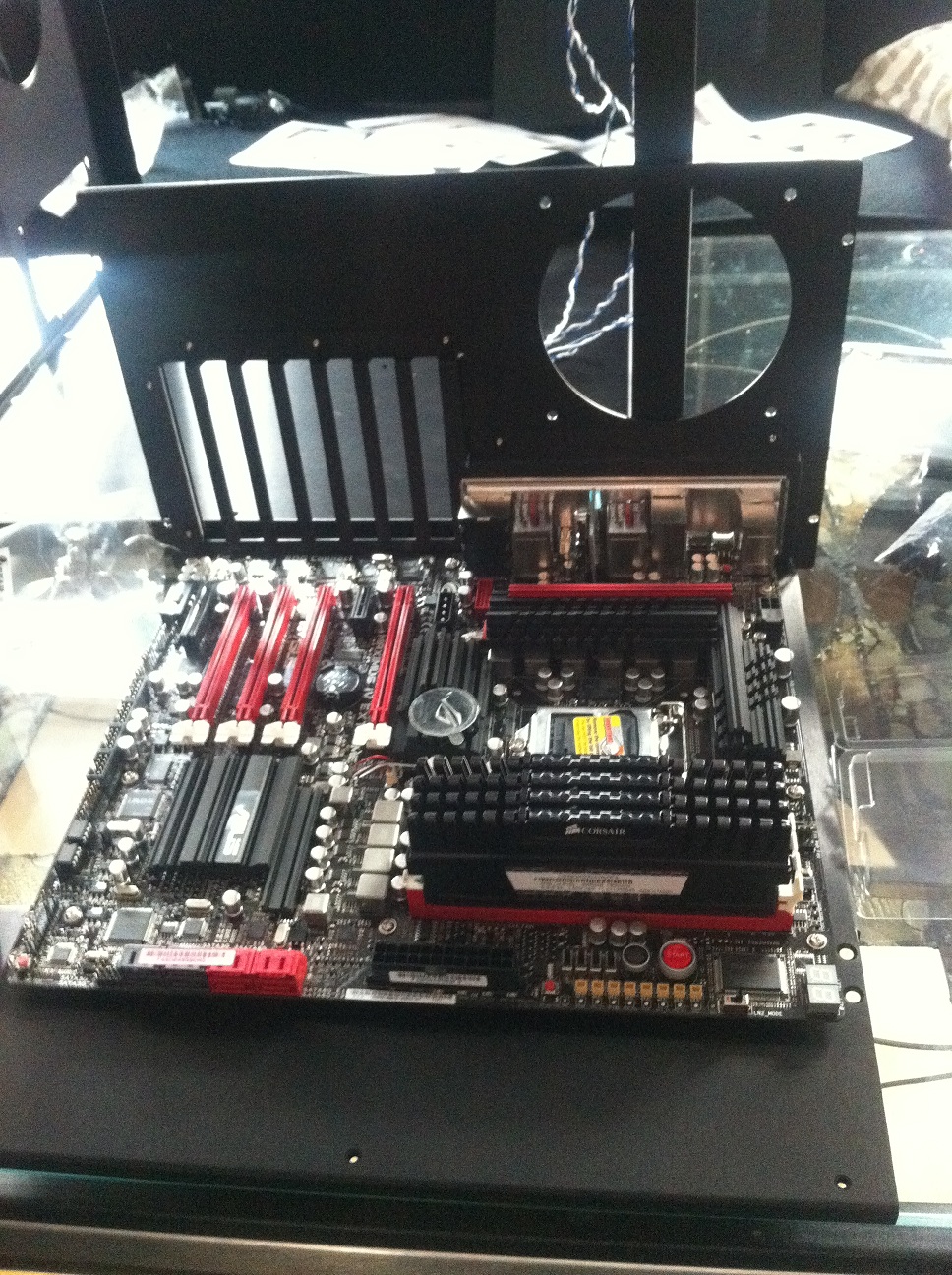 Motherboard and ram installed on the MB plate. This was not super easy to figure out either. I assumed that backplate went on the outside, evidently you install it to the MB plate and then just slide it in, easy as pie. CPU is not installed because at the time I did not have the Waterblock for it and I still dont have the thermal paste delivered. That comes with the videocards. 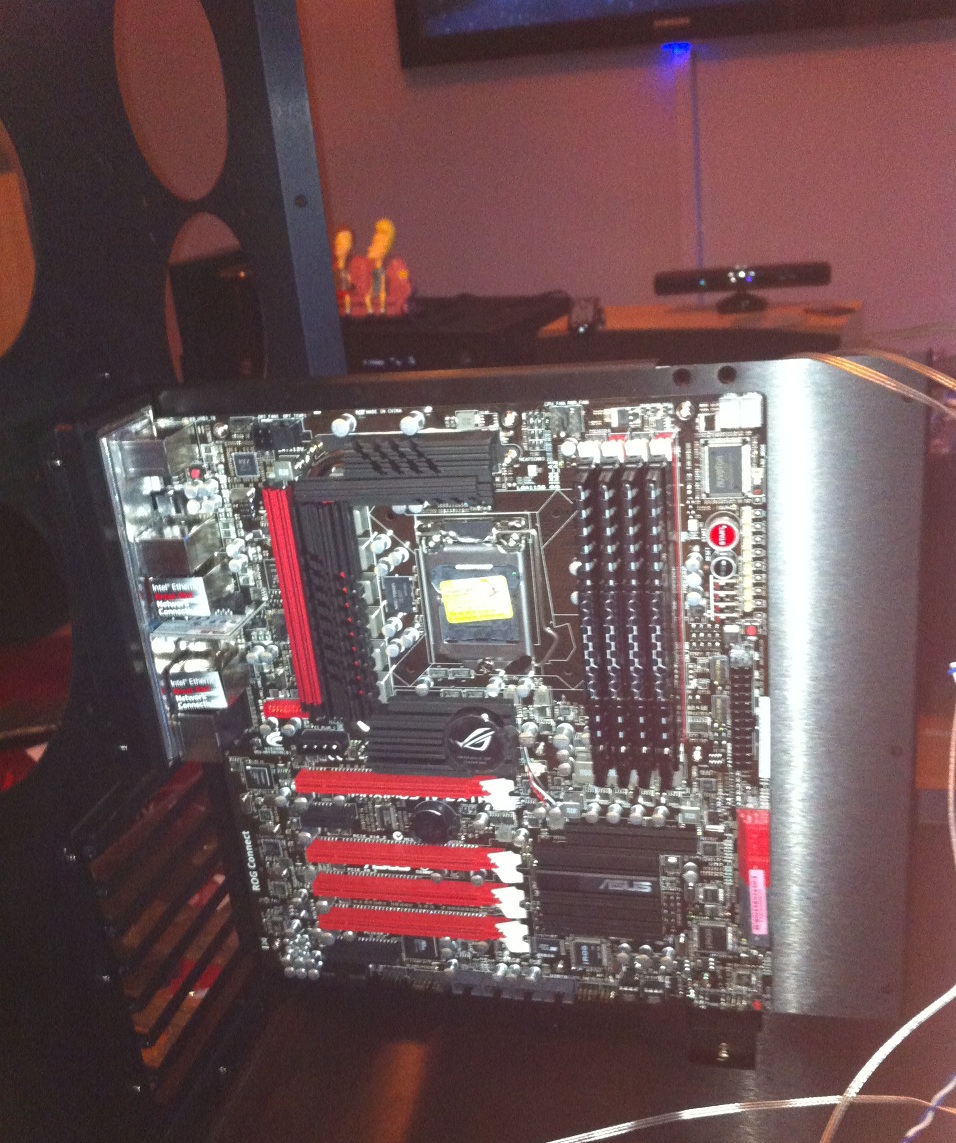 MB plate with board installed in the chassi. 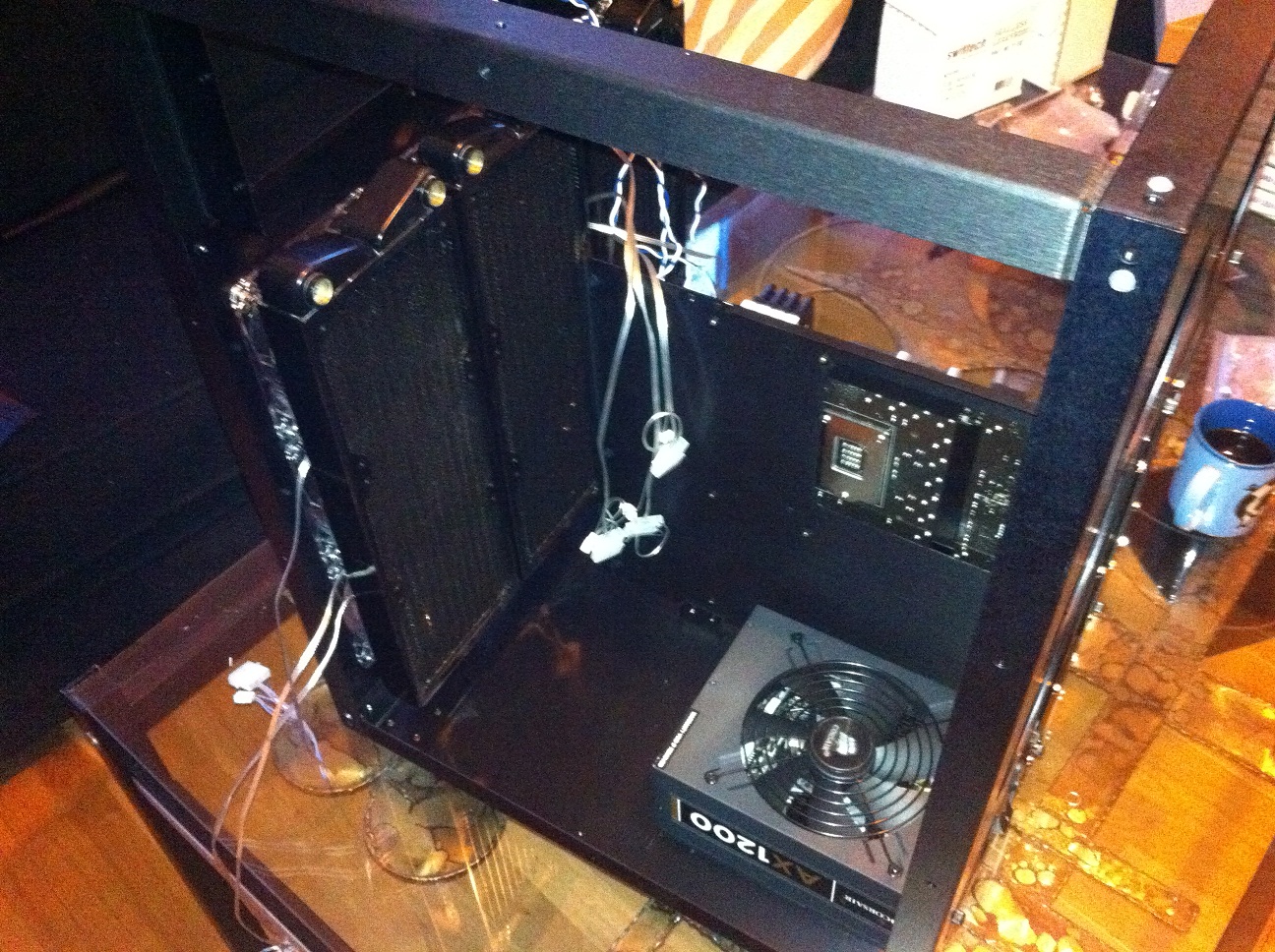 Radiators with the fans installed. I have no doubt I took the wrong kind of cheap fans and I also wonder how long it will take for me to go insane from that blue quad light I have on them. I also forgot to order grills for the fans, will have to fix that before I install all the tubing and stuff. Also the PSU is installed. Its kind of hoovering over the bottom plate with nothing but four thumbscrews holding it in place. 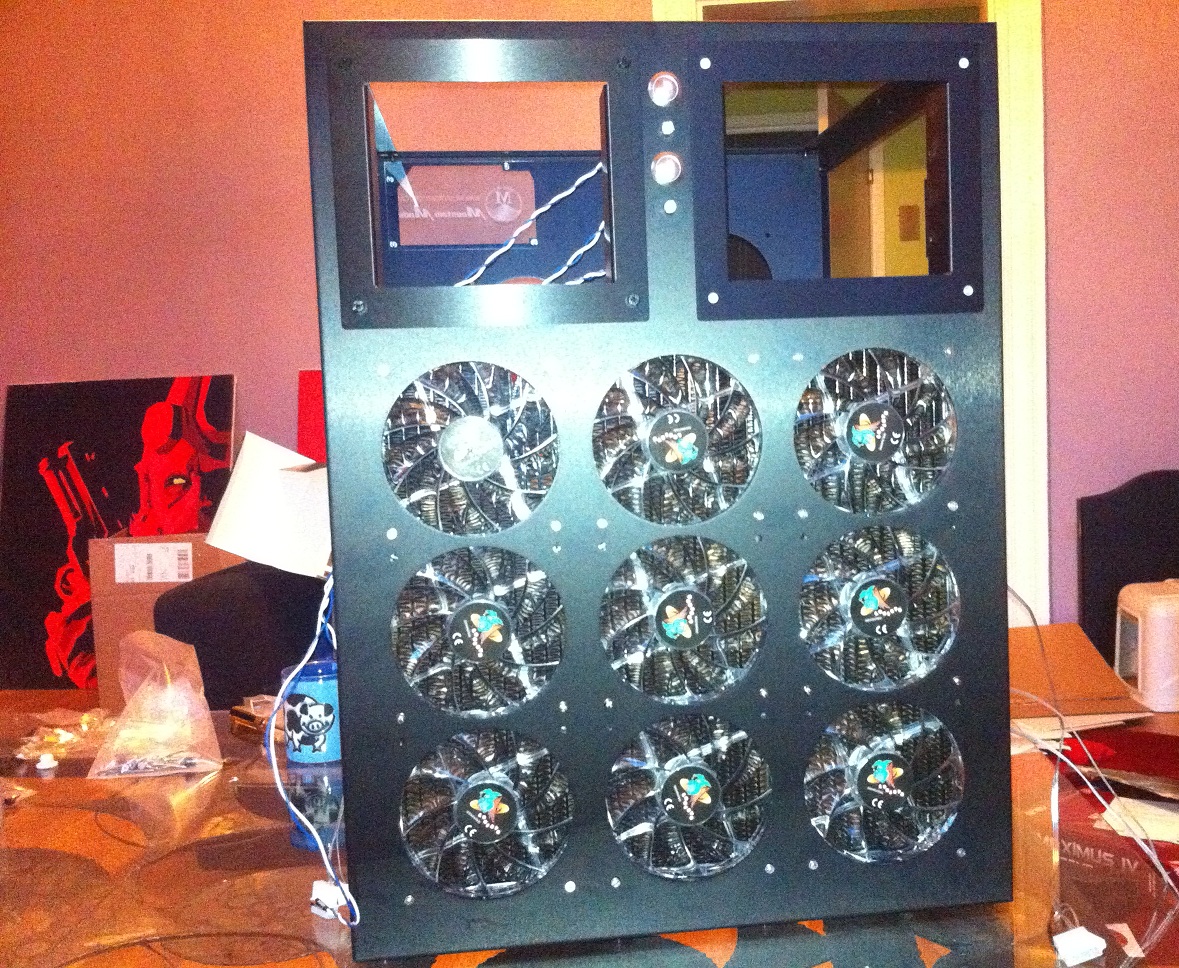 I took this image about a week before I got the reservoir and all of those parts. Looks cool right? Also Hell Boy rocks. 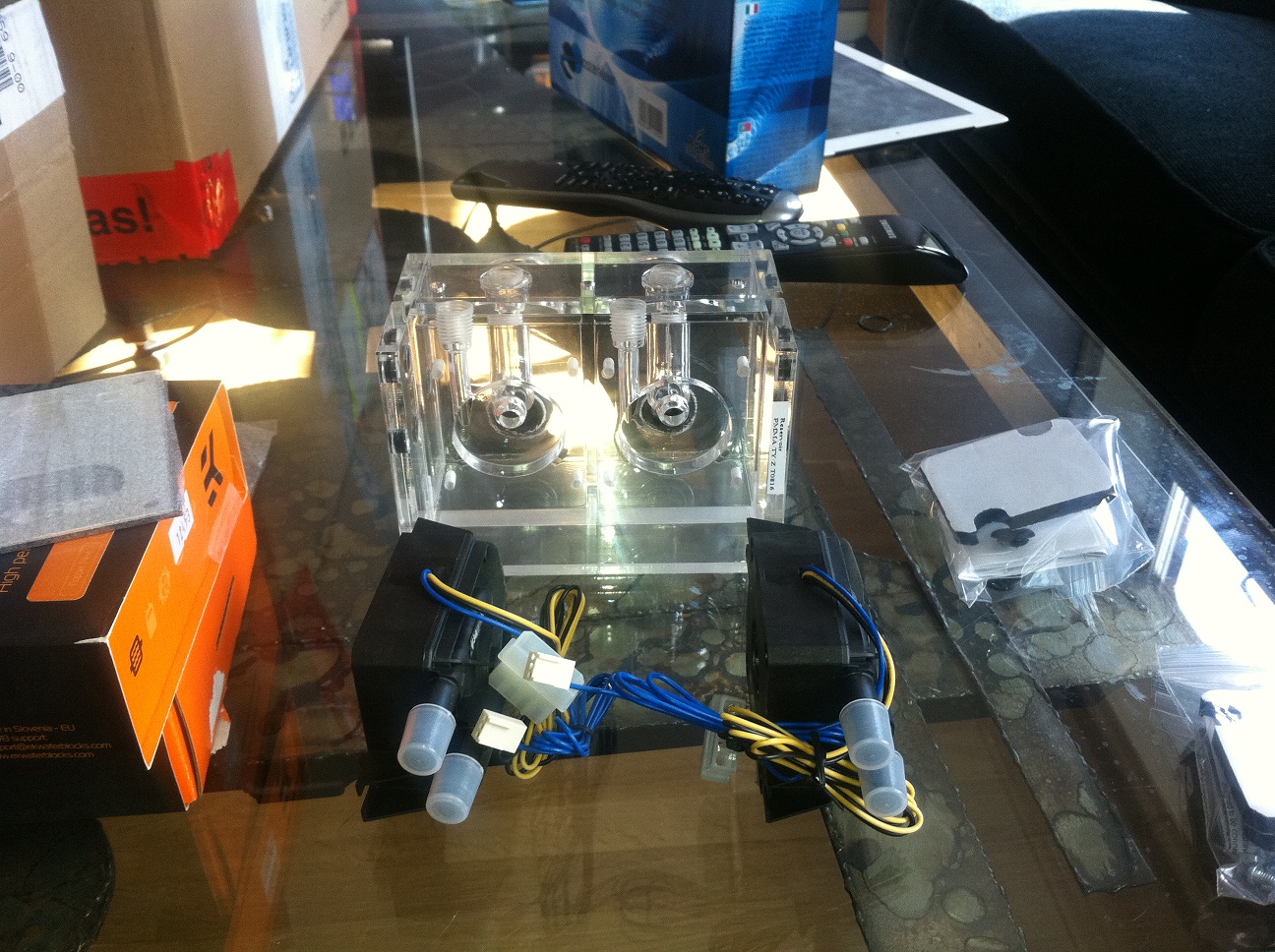 My package from Aquacooling containing both GPU waterblocks, the CPU waterblock, all the fittings for the tubes as well as the reservoir arrived.
In this picture I am preparing to install the dual pumps into it and then insert it into the chassi drive bay. 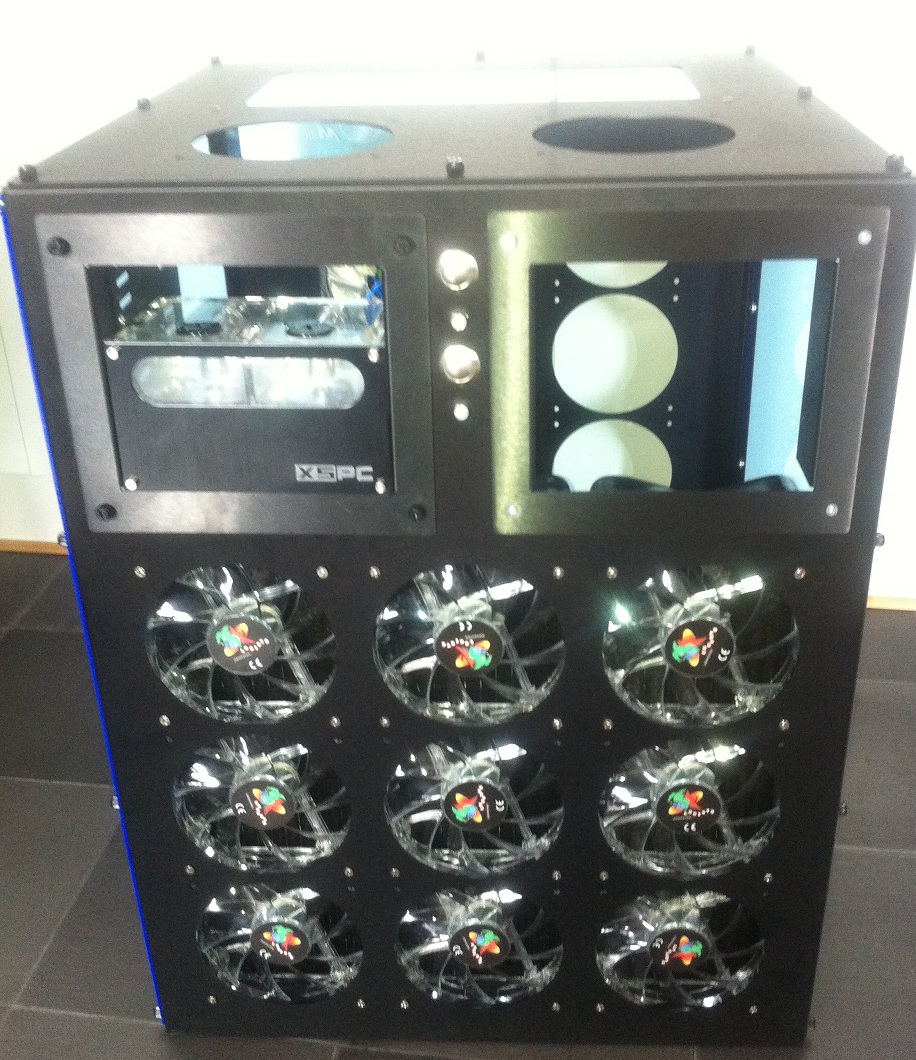 Reservoir is installed. It looks cool. But it just occured to me that I should order a blueray burner as well as something to fit into the other three 5,25 bays or it will just be a big hole there. Or I can order backplates. Most likely I will buy two fan controllers holding 8 fans each. I am aware I used two types of screws for the front. I really could not make up my mind about that though, I think I will go with the trusty thumbscrews here again though.

All I need now are those damn videocards. Because of what happened in Japan they are sold out everywhere, I prepurchased them along with the monitors and the thermal paste but expected delivery is around the 20th of this month. I will then naturally update this thread with my attempts at installing waterblocks on the videocards or just destroying them as seemes a very likely turn out.

A screwdriver helped me to bend them back in place more or less.